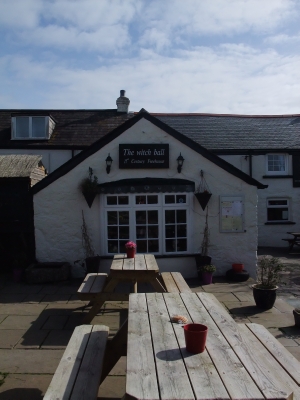 There has been a restaurant and tea rooms here for about 50 years, but before that it was a farm.  We do not know for certain when it was originally built but house historians tell us that part of the building was built as early as the 1400s.

We know there was a farm on the Lizard at the time of the Doomsday Book in 1086, but we do not know just where it was.  In those days, maps of property in country areas did not exist.  In fact the first proper map of the Lizard that still exists only dates from 1840.

The farm was originally a Cornish Longhouse Farm.  The bar area is the room in which the farmer and his family lived. There was probably a hole in the roof to allow the smoke to escape from their cooking fire and no upper storey.  The front door led through a passageway to a door at the back that would have led to the farmyard.  This was called a cross passage.  The other end of the house, where the kitchen is, was a byre where the animals would be kept at night and in bad weather.  This kept the animals safe and the heat from the animals helped to keep the house warm in winter.

The house was built partly of fieldstone (stones found lying in fields locally) but much of the material used was Cob.  This is a mixture of mud, straw and often animal dung mixed together and compressed and built up in layers.  The finished walls were plastered over to protect them from the rain.  Cob draws a certain amount of moisture from the ground so it never completely dries out.  Until about 1600, this was the most common building material in the West of England, and it is also found in other parts of the country.  It may sound a primitive mixture but the proof of its strength is that it is still here and holding firm 600 years later.

If you look at the windows, you will see just how thick the walls are.  The interior may seem rather dark to you when you come in from the sunshine outside.  This is because glass in the windows of ordinary people’s homes was unknown before the 18th century.  Windows were small to keep out the winter cold and rain and would have been secured at night by heavy wooden shutters.

You may find some of the roof beams inside the bar rather low for your height.  This is partly because people four or five hundred years ago where generally much shorter that people of today.

Buildings built on exposed headlands, as this was, suffer from very strong winter winds and even when the second storey was added in the sixteenth century the inhabitants would not want to make the building too high because it would increase the risk of storm damage.

Just by the front path is a restored medieval well.  This would have supplied all the water for the house for cooking, washing, drinking and making beer.  It is about six metres deep and still in full working order.  In fact, we have a pump that drains off water when the level gets too high.  Our ancestors would not have needed to use the pump as they would have used the water everyday.

We have been told that about 30 years ago, human bones were found down there, but we haven’t been able to find out any more details of the story.   In the early 1800s another well was dug at the back of the house to provide drinking water for the animals, and this also still exists.

The Lizard suffers from very strong winds in the winter.  It is likely that the farm was reroofed on more than one occasion because of this. Surveyors have told us that some of the roof timbers above the kitchen are made from old ship’s timbers.  There have been hundreds of shipwrecks around the Lizard and thrifty local people would have looked for any timbers that would have been washed up on local beaches and used them for repairs to their property.  The timbers in the roof at the other end are also very old.  Some consist of whole trees, their branches lopped off, forming the ‘A’ beams.  The tiles are all slate.

Until fairly recently, we still had some old hand-formed tiles, but the weather has finally destroyed these.  In Tudor times, (the 1500s) the people here must have prospered a little and wished to modernise their house.  They put in the wide Tudor floorboards that can be seen above your heads in the bar and built an upper storey.  This gave the family more privacy and cut off the sleeping area from the living area.  We are not sure when the upper storey was built over the kitchen end, but was probably later and it may have been to turn the far end into another cottage, though we know at one time the upper floor was used as a hay loft.

Some time in the late 1500s – early 1600s, an extension was built on at the back of two floors, giving two more good size rooms (one of which we use as the snug).  This may have been essential as the family grew in size, and they probably had farm and domestic servants, also sleeping in the building.  When the census started in 1841 we know they still had two live-in farm and domestic servants.

In the late 1500s, the Spanish made several attempts to invade , the most famous being the Spanish Armada of 1588.  A further attempt in October 1597 to land an invasion fleet at was ended by a severe storm off the Lizard, when the whole fleet sank.  It is said that at least one soldier from that fleet was washed up on the shores near here and brought to this farm house, where he later died from his injuries.  This soldier is known as Ferdinand, the ghost who haunts our bar today.

The extension to the front of farm was probably added in the late 1600s and was to house the carts and horses used on the farm.  There is a tale that this part is haunted by the ghost of George, who was a stable lad killed by being kicked in the head by a horse in 1710.  He is reputed to move things around!  We have never seen him, although others claim to have done but we always blame him when knives and forks go missing.

In a building as old as this, it is inevitable that ghost stores will develop.  We have mentioned just two, Ferdinand and George.  However, both we, and the people that have lived here before us, have had visitors who claimed psychic powers and have insisted that there are other wandering spirits that they can feel everywhere in the house.  We can honestly say that if there are any such spirits, they must be friendly, as they have never troubled our family.

A witch ball hangs in the restaurant window.  These shiny balls of glass were hung in Cornish cottages and even in churches in past centuries.  They were always hung in a window or near a doorway.  If a visitor’s reflection could not bee seen in the ball, he or she was thought to be a witch or possessed by evil spirits and not allowed to cross the threshold.  Our witch ball dates from 1721 and has initials on it.  It was probably given to or bought by a new owner, or by one who was particularly wary of evil spirits.  Many visitors have in the past checked their reflections and even had their photos taken with it.